L-theanine is an amino acid that’s found in tea leaves. It’s currently being marketed in dietary supplements as promoting the ability to relax, reduce stress, and improve sleep while also boosting concentration and alertness. Michael Breus, PhD, better known as the Sleep Doctor, says that L-theanine, in supplement form, can help with relaxation, focus, and sleep. “One of the appealing aspects of L-theanine is that it works to relax without sedating,” Breus says on his website. “That can make L-theanine a good choice for people who are looking to enhance their ‘wakeful relaxation,’ without worrying about becoming sleepy and fatigued during the day.” Check out the 9 worst foods for your brain.

Your body produces this amino acid, but it’s also available in dietary supplements. Dan Engle, MD, who is board-certified in psychiatry and neurology, told lifestyle website My Domaine that he takes acetyl-l-carnitine because it supports the neurotransmitter acetylcholine, which is responsible for memory storage and recall. “Supplements are helpful for the optimal production and effectiveness of acetylcholine,” he says. If you’re looking to stay sharp for work, try these 7 morning brain boosters.

Phosphatidylserine is a fatty substance known as a phospholipid, and it plays an important role in the brain, contributing to your memory and mental processing. “If you want to support a healthy brain (and heart), along with healthy cell development and maintenance, then take a phospholipid supplement,” Dr. Engle told My Domaine. The substance covers and protects brain cells and helps transport messages between neurons.

Also known as velvet bean, this is a tropical legume that people have long touted for its therapeutic value. One of the compounds found in the plant is L-DOPA, or levodopa, an amino acid that your body uses to make several neurotransmitters, including adrenaline and dopamine—which plays a role in pleasure and reward centers in the brain. “Mucuna pruriens has significant antioxidant action that works in tandem with L-DOPA to promote brain health,” explains Edward F. Group III, DC, founder of the Global Healing Group. “When L-DOPA crosses the blood-brain barrier, it helps to increase brain levels of dopamine, an essential neurotransmitter associated with regulating mood and cognition.” Check out these 14 weird brain exercises that will make you smarter. 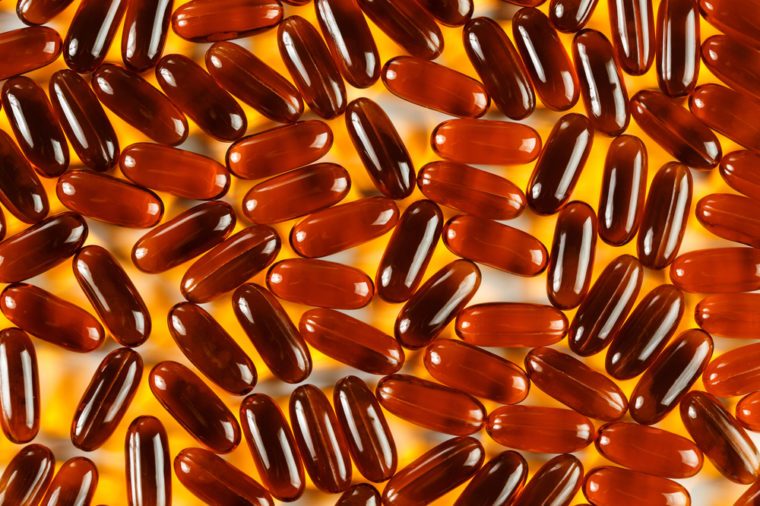 Yes, that’s a mouthful, which is why most people call it PEA. This organic compound turns up in chocolate and nuts, and it behaves like a neurotransmitter in the body. It stimulates the body to make dopamine, norepinephrine, and other vital brain chemicals. David Scheiderer, MD, a psychiatrist in Sarasota, Florida, writes on his site Integrative Psychiatry that he uses PEA dietary supplements to treat symptoms like fatigue, fuzzy thinking, poor concentration, and lack of motivation. But he warns that the stimulant effects of PEA can be a problem for people who already have high levels, including some people battling agitated depression or schizophrenia. Learn these 50 surprising facts about the brain.

“Omega-3 fatty acids are essential because the body cannot produce them; therefore they must be obtained from the diet or through supplementation,” neuroscientist Kristen Willeumier, MD, explains to Brain MD Health. These healthy fats help maintain the fluidity of brain cell membranes, facilitating communication between nerve cells. “The benefits of taking omega-3 fatty acids daily not only include supporting brain and heart health, but they also maintain healthy vision, hair, skin, and nails. Furthermore, omega-3 fatty acids support healthy joints as well as help healthy weight management,” she says.

Honey is popular among the health-minded crowd for its natural benefits. “Honey is a powerful energy source for our brain,” says Keerthy Sunder, MD, who specializes in boosting brain performance with targeted brain training, his line of Brain Tune dietary supplements, and soothing meditation. “One study supplemented the normal diet of two-month-old rats with honey over a one-year period and found that the consumption of honey may reduce anxiety and improve spatial memory,” he explains. Try making a habit of these 38 genius activities your 80-year-old brain will thank you for.

On the TV show The Doctors, three audience members volunteered to try out chewable coffee dietary supplements. Each cube packs 50 milligrams of caffeine, which is equal to a cup of coffee. The cube also has 500 percent of your daily allowance of the vitamins B6 and B12, 100 milligrams of L-theanine—which research has found to enhance caffeine’s effects—and 6 grams of sugar.

There is evidence that caffeine can boost your concentration and mood, but getting it in concentrated form may not be the best idea: When the team of doctors checked in with the participants, all three were extremely jittery—they said they felt as if they had just downed a whole pot of coffee. While this was hardly a scientific test, the doctors felt that chewable coffees weren’t helpful for concentration. When a reporter for the news site TNW tried the cubes, he felt that his experience must be similar to what cocaine users go through. Make sure at least some of these 25 brain-boosting foods are among your diet staples.

The post What Doctors Really Think of Those Brain-Boosting Dietary Supplements appeared first on Reader’s Digest.

Vitamin C and its Role in the Covid-19 Pandemic

View all posts by Admin →

How Much Water Should I Drink a Day?

Good web site you have got here.. It’s difficult to find high-quality writing like yours these days. I truly appreciate…

Wallace Proud - Why He Doesn’t REALLY Want the Perfect Woman…

You're so cool! I do not believe I have read through anything like that before. So good to find someone…

Sheron Dienhart - Using Ovulation Predictor Kits to Help You Get Pregnant? Here’s What You Need to Know

I like the valuable information you provide in your articles. I will bookmark your blog and check again here frequently.…

Cookies
To make this site work properly, we sometimes place small data files called cookies on your device. Most big websites do this too.
Accept